Every so often we miss the school bus in the morning and today was that kind of morning when you had 15 minutes to spare and all of a sudden the bus is swishing by outside. When we jumped in the car and I realized it had stopped raining and having no inspiration at all for standing on a treadmill for an hour I put on my runners as soon as I got home and went for the track in the forest preserve. I hadn’t run for long when it started to pour down with rain but I felt real good so I thought I was do a 8k run but when I go to the turning point (the track goes on and on) I thought I would run a little longer and I kept on going.

When my brother and sister was here we set up personal goal on what we wanted to achieve by the time we were going to see each other again and my goal was to run the distant of half a marathon, my longest run I ever done is 12k on a treadmill.

Still having a good feeling and a good run I thought I this is it! I will admit that I was not completely sure on how long a half a marathon was because I for sure did not plan on it when I stepped out the door but had a feeling it was around 20k. When it was time to see how far I had run and make a decision if I would go into the next forest or head home I realized I had 4k to go and my legs was feeling like two rocks and I stated to think about all the people I meet everyday that challenge themselves beyond their mental barriers.

This is my friends who make it to the gym at 6am, running with back pain because she loves it and this is the only way she’ll keep sane, coming back and doing a race after recovered from a stroke or my 9-year-old son who works his ass off at hockey because he knows he is getting better every time he pushes himself to max…then I could for sure finish my “own half marathon challenge”!

As I ran up on the driveway I pulled out my phone I stopped the timer and i finished on 20.3k in 1.53 minutes and I felt awesome although my feet and legs where hurting like crazy. The only thing was when I goggled the distant for half a marathon it is 21k….

Whaaat, I was 700 meter short from my goal. I don’t know if it was a decent time or not but I am very glad for what I accomplished today and if Jonathan asks me to do a squat I couldn’t do it to save my life. 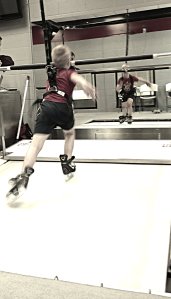