This memorial weekend we have been very busy with both hockey and soccer as well the social aspects of this holiday. This has left me eating very delicious food and drinking a fair share of wine especially after the very thrilling game between the Blackhawks and Detroit 😉 This morning the first thing Jonathan asked me when I came in  was if I had been drinking over the weekend. He only had to take one look at me to see that I had and I was so busted…lol

I think because this is an off week we will be doing total body so today we started out working the core on the mat before we picked up any weights. To be honest I was very tired (not the muscles) and I really had to push myself but at the same time I knew could have worked heavier weights but it was not happening. First out was single leg romanian deadlift, single arm rows and squat jumps and after the third set I still had a lot left even though I didn’t admit it to anyone at the time. 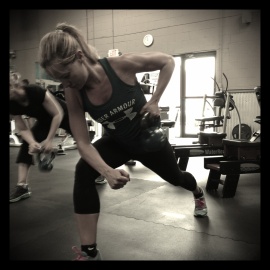 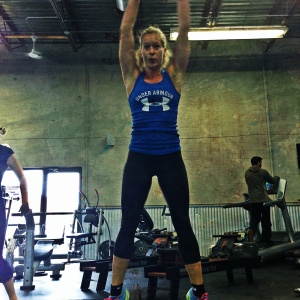 We carried on the workout I did not say that much as I was a little pissed off at myself because I didn’t have the go in me. With single arm push press, kettlebell swings, modified plank with leg raise and finally a side plank with hip raise we completed the next circuit.

Before we finished the day with skipping rope and interval sprints outside we use 12 pound dumbbells to do 15 reverse lunge with high knee and at last one we kept the knee up and cranked out 15 biceps curls before we switched legs followed by a sumo row with the kettlebell.

I am coming back in tomorrow and hopefully I have a little more energy… or not as I first have to bike the 6 miles over to Lifestyle Fitness, either way I want to have a real good session tomorrow so now I am off to bed 😉