When I got into Lifestyle Fitness it was just me and mrsT who I have not seen in weeks and it was nice to catch up for a few minutes before we got to business. First out we did rows and push ups to warm up the arms but unfortunately mrsT has some issues in her shoulder so as soon the warmup was over she hit the legs instead and I kept on working the arms.

When she was doing leg extensions I did single arm shoulder raiser to the front followed by high rows to you nose and at this point it still felt like a warmup.

This didn’t last long because after the first set of barbell jerks it started to get heavy and Jonathan kept on raising the weights. The goal was not to use the legs but the last few reps it was totally impossible to get the barbell over my head without the help of the legs. 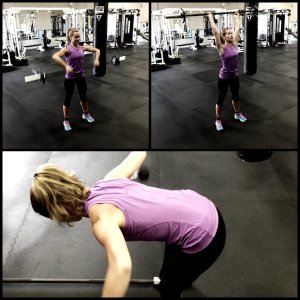 When Jonathan told me it was time for pull ups thought he was kidding me, not only was I totally exhausted but this is also my least favorite arm exercise to do but I also believe the things you don’t like are the one you need to practice on because most likely you suck at them (so true). To complete the circuit I did 15 overhead slams with the 12 pound medicine ball and rows.

At this point I thought I was coming to an end of the workout but I was so wrong I had a long way to go…so back to where I started I went back to the TRX to hit triceps and biceps with 30 seconds circles with the heavy ropes and when my third set was done I folded the rope together…that was a mistake, I was not done… 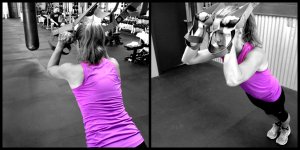 My last circuit for the day was triceps extensions, hammer curls and slamming the heavy ropes from a squat jump and at this point my arms was totally ripped into pieces and I know that I will be sore tomorrow (I am already feeling it and it’s only 2pm!). It was so worth coming in and get my ass whipped… I am already in a better mood and this is what I call to “get your money worth”!!! 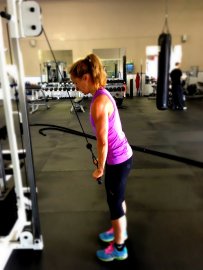