I will admit that after tuesdays sprints and Pilates training I did not feel so great when I got into the Lifestyle Fitness. I only just stepped through the doors before Jonathan told us to go outside and running laps around the cul-de-sac. The weather was lovely but when we got into the sprinting… yes again, I thought he was having a laugh because I was honestly about to pass out, not only were my legs dead but it also felt like I was  breathing through a straw. After a few sprints we finally went inside to start our upper body workout. 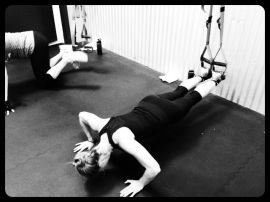 We started by doing rows and bicep curls over at the TRX, then into a jack-knife followed by push ups, it was so hard any and every movement I did felt twice as hard as normal. When we were done with the TRX we moved over to the weights and the first circuit we did push and pulls starting with single arms row and chest presses using the 25 pounds dumbbells. We were told what ever weight we picked we had to stick with for both exercises and the last movement was pulldown using the machine…(I’m still working on my pull-ups challenge 🙂 ) 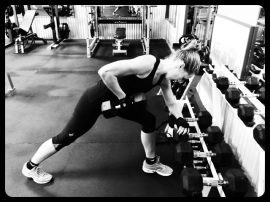 This was heavy pushing and when it was over we started to pick up on the “cardio’ intensity again. Throwing the medicine ball into the twisting the midsection of the core I could really feel the oblique working as they were already sore from Rebecca’s workout and it was a relief when we slammed the ball from overhead instead. 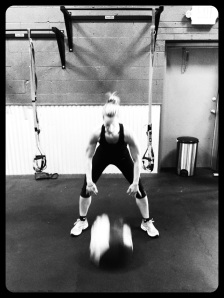 If you never tried it I do recommended it because it is not only tiring the arms and the core but it is also great for endurance training especially when used as part of an interval like we did. Jonathan always pair the exercises with other exercises that takes approximately the same amount of time to complete so the barbell press and bicep curls was our “recovery” before we started all over again.

After finishing off the workout on the ropes I had it and when Jonathan told me and MrsL to have a day off (today) I thought that sounded like a great idea. 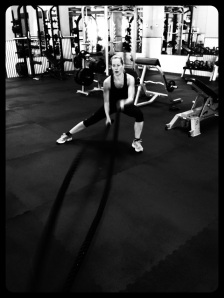 When I woke up this morning not only had the summer turned into winter again but I was both tired and achy, the only thing that was on the positive note is that my cold is much better. So with little motivation I was debating with myself if I should run or not and I came to the conclusion that I should. It was not a pretty run and it was very windy but I did it and it felt sooo good afterwards!