After a very busy day painting my basement and cleaning up in our backyard I ran out of time for what initially was going to make for dinner this evening. So I browsed through some magazines I had lying around the house to get some inspiration on what to make so this is my take on a traditional Cochinita Pibil. 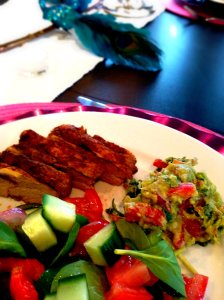 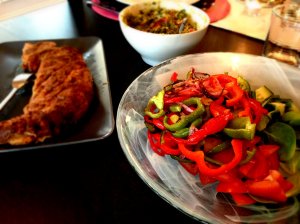 How to: Start with mixing all the spices with the vegetable oil in a bowl. Trim the tenderloin from fat and make small slits and rub the spices into the meat and fry it quickly in a frying pan so the meat gets a nice browning. Move the meat to a ovenproof, dish sprinkle over the lime juice and place the meat int he oven at 200C/400F for about 15-20 minutes. When the meat is almost done remove it from the oven and cover it under tinfoil for another 5-10 minutes.

At the same time roast the bell pepper and the onion

When everything is cooking in the oven mix the ingredients for the guacamole and dice some tomatoes and cucumber.