Yesterday I did not sit down until I actually went to bed and by then I was absolutely exhausted! I’m not sure if it was from the crazy leg/cardio workout or the fact I had a million things to do or maybe it was a combination!

Anyhow yesterdays workout was both fun and very intense.  We started the day doing hamstring curls into a single leg romanian deadlift with 20 pounds dumbbells. At this point my legs were still a bit stiff from my Tuesday run but as soon as they got warm it was no longer an issue. 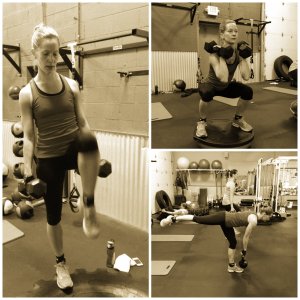 As soon as our little warmup was over and done with we really got the leg working. We started with balancing on a flipped over bosu ball doing weighted squats, this is an awesome exercise! When this was over we lunged cross the gym followed by weighted step ups. At this point I realized we were in for more cardio than what I was expecting and it was only got better! 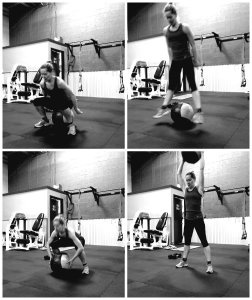 The next circuit up was new and was a little bit more intense and the first exercise. We were working with a 12 pound ball. Squatting to a sit,  jump behind the ball, pick it up from a squat and push overhead. Although it can be mentally easier to do the same type of exercise over and over because you sort of know what you are in for but I really enjoy new combinations were I have to challenge myself! 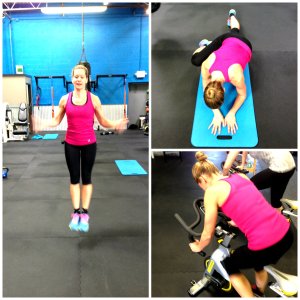 Straight from here we took to the mats doing leg raises from push up position and then straight into spiderman climbers (same leg). Next station was jumping rope and as a former gymnast I got to do my little tricks, like double jumps and as soon as the minute was up we had another minute on the bike. We this circuit three times through without any rest as we were told to bring our water with us! 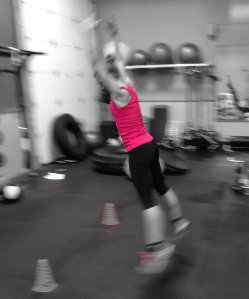 The last 10-15 minutes of our workout was insanely intense as we started doing suicide across the gym followed by sprints and at this point my last concern was my legs because I thought I was about to die and I was about to go outside to dig my own grave…lol.

And when we all might have thought that maybe this is it Jonathan had us jumping with two legs across the gym followed by speed skaters! Like I said I was completely capped when I was done and  I guess the only way I could have kept on going yesterday was by not sitting down until the day was over and then I slept like a little baby.

Now I am going outside for a light jog because with two days in a row with crazy intensity I need a recovery day!

2 thoughts on “So spring break is over…So let’s get ready for Summer!”