This morning started with the sun shining through the windows and I had my first cup of coffee all alone in a sleepy house. My plan was to go for a four mile run over at Lifetime Fitness but I was potting around the house and before I knew it the clock had passed noon and we had a birthday party, hockey game and the end of the season hockey party so the run was not happening. 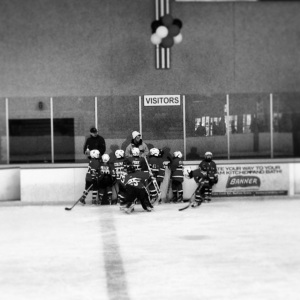 It was the very last game today with this awesome team and it was also Knut’s last game as a mite and what a game! The team played really well and all the Wilmette fans got one final great show. After the game we picked up Mira and we went to the end of season party over at Michigan Shores Club. The kids were bowling and having a blast while the parents nibbled on some great non “low carb” hors d’oeuvre’s next to an open bar.

I was offered a drink but turned it down as I said I was going to the gym and I also mentioned I was trying to run my four miles in 30 minutes. When I finally stood on that treadmill I thought to myself that I might have been a little too optimistic regards my abilities but I thought I would give it a go, so pushed myself very hard and completed the four miles in 29.57.

Back at the club I was very tempted to have that glass of wine and do the run another day but I believe it is at these moments when your choices will determine if you hit your goals or not and I am very glad I made the right choice!